The “Archivio storico Tullio Serafin” association calls for the year 2018 the celebration of the 50th anniversary of the death of orchestra conductor Tullio Serafin.
The project intends to highlight the memory of the famous orchestra conductor involving the main institutions where he conducted, as well as to let a wider audience, not only of Opera lovers, know his story and his contribution to music and melodrama.
Therefore, the association, also relying on the involvement of other cultural institutions and cities interested in the initiative, intends to celebrate this recurrence next year as a promoter, and aggregator of a global and multidisciplinary calendar dedicated to the figure of Tullio Serafin and his story.

The Tullio Serafin project “call for celebration” is an extensive invitation to the community of music and melodrama for the 50th anniversary of the death of Maestro Tullio Serafin. In general, the main aim is to start a campaign to raise awareness and condivision of the project which may eventually lead to the realization of initiatives, ideas, events and anything else that is deemed necessary to remember the figure of the Maestro in 2018, involving the greatest number of theaters, institutions and the widest public.
Anniversary celebrations are a very important event that we hope may see full and participatory involvement of the whole community of music and melodrama and in particular of local and national and international institutions that were in direct contact with Maestro Tullio Serafin.

Download the OFFICIAL LOGO of the Call of celebration 2018.

Among the objectives of the project the following must be highlighted:

The choosen methodology aims at the involvement and direct participation of the music world: theaters, public bodies of various levels, private organizations, associations, foundations, conservatories, schools, journalists, writers, musicologists, orchestra directors, musicians, stage directors, opera singers, other opera artists and melodrama enthusiasts who will accept the invitation of the “Archivio storico Tullio Serafin” to propose ideas, initiatives and actions to celebrate the year 2018. The association will divulge the call / invitation by publishing it in the site, the media and social channels at disposal.
Entries received by individuals (by self-candidacy or by invitation) will be included in the general calendar of the 50th anniversary of the death of Maestro Tullio Serafin with the consent of the Committee of Celebrations.
The project is based on the values of multi-tiered membership, participation and promotion in order to celebrate the anniversary and the memory of a great character in the history of music and opera.

The celebration Committee set up by the association consists of:

The celebrations commemorating the 50th anniversary of the death of Maestro Tullio Serafin will begin formally on 3rd February 2018 with the publication of the first initiatives, to continue throughout the year.
Ambassador of the project is soprano the Barbara Frittoli.
The association, for its own part, will perform a series of activities and concerts dedicated to the Maestro thanks to the support of the Concetto Armonico Cultural Association.
The calendar of initiatives for the celebrations will be included in the program since January 2018 and will be enriched with events that will eventually be submitted to the association.
To join the celebrations one must present to the association “Archivio storico Tullio Serafin” the activities and/or initiatives that one intends to dedicate to the memory of Maestro Tullio Serafin.
Aware of the multi-annual programming of many institutions and of their almost impossibility to enter new initiatives, it should be noted that they can also devote to the Maestro appointments already planned, if compatible with his life and artistic career. The association can provide technical-scientific support for common activities, also providing the material of its archive.
The Scientific Committee created for the Serafinian celebrations will evaluate the memberships.
All those who join the project can use the logo of the celebrations within their programs: 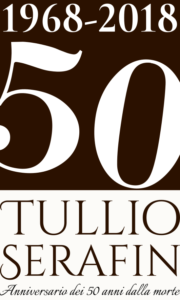 The initiatives will be held throughout the year starting on 3rd February 2018.
By way of example, celebratory events such as concerts, works, conferences, publications, lessons, essays, inspired by the famous Master can be realized.

Project recipients are various subjects of classical music and melodrama world from the national and international scene can be involved who enjoyed the artistic contribution of MaestroSerafin during his long artistic career and beyond.
Therefore, the main recipients of the invitation are theaters, conservatories, associations and foundations, various public bodies, private bodies, schools, journalists, writers, musicologists, orchestral directors, musicians, directors, opera singers, stage and costume designers, other artists of the opera world and melodrama enthusiasts.